skip to main content
Return to GSS
You are at:Home»Alumni»Hip-Hop Therapy: See You At the Crossroads
Story written by J.C. Hall, L.M.S.W. – GSS 2013

In the summer of 2010, I applied to Fordham University’s Graduate School of Social Service in pursuit of a Master’s in Social Work, believing it could end up being one of the greatest regrets of my life. Having just received my Bachelor of Science degree from Fordham as a psychology major, continuing my education rather than pursuing my dream of rapping full-time felt like a personal betrayal. Fordham’s GSS was the only graduate program I applied to, which was emblematic of my ambivalence, and I secretly hoped I would be rejected. I had a positive experience at Fordham’s Lincoln Center campus as an undergraduate student, and I figured I would apply there primarily because of my familiarity with the location. Upon being accepted, I started to reevaluate my options, knowing that attending would mean continuing to put my pursuit of a career as a Hip-Hop artist on hold, which was the arena where I felt I could have the most widespread impact. Hip-Hop for me has always been therapy, and it is part of the reason I decided to become involved in the mental health field in the first place. 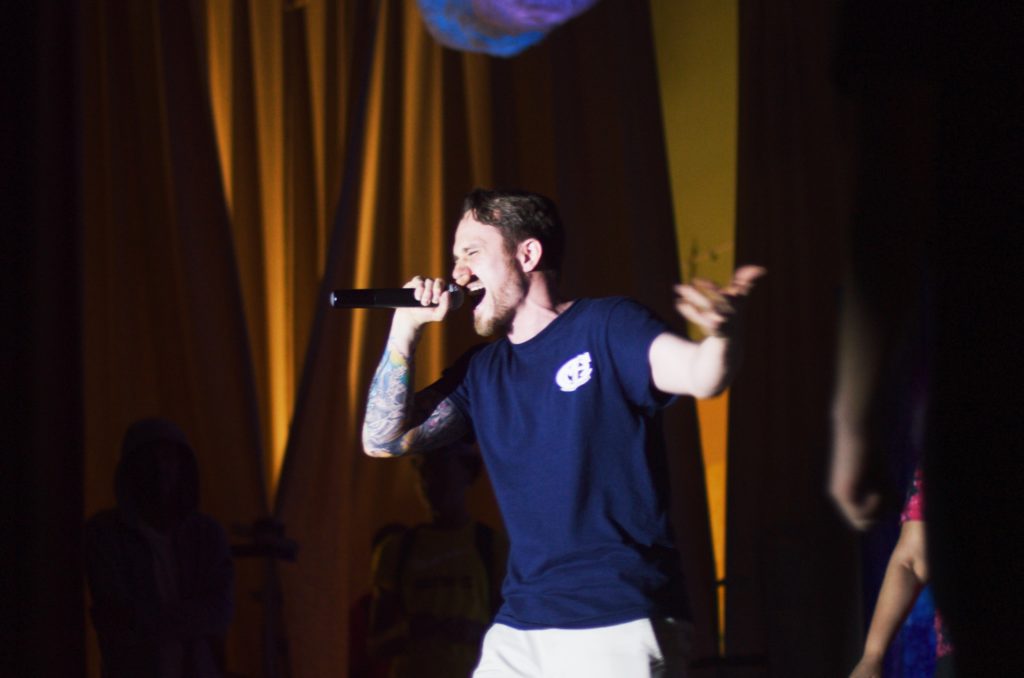 J.C. rapping in the closing cypher of the Studio’s 2017 annual showcase entitled “Imagine,” which revolved around the concept of manifesting one’s future by dreaming and having self-belief.

Soon thereafter, I learned of music therapy and started scouring the internet for what seemed like a happy medium. A cursory online search revealed a handful of programs in the area, and I began to pour through eligibility requirements. To my dismay, I discovered an audition was necessary where proficiency in particular instruments and an ability to sing had to be exhibited. Being versed in the art of rapping and Hip-Hop music production was not on the list, and since I did not know how to play the guitar or piano—let alone sing—it was clear to me that my skill set was not included in these programs’ vision of music therapy. As I sat there in absolute defeat, what seemed like a ridiculous idea popped into my head: remove the word “music” from the search bar and replace it with “Hip-Hop.” Half-heartedly, I entered “Hip-Hip Therapy,” assuming I would only be further feeding my hopelessness. However, to my surprise, a few results surfaced. While initially dismissing this as too good to be true, I cautiously combed through each link for an indication of legitimacy. Not only was Hip-Hop Therapy an actual term, it was a therapeutic approach developed by a social worker named Dr. Edgar Tyson who had published a handful of scholarly articles that laid the theoretical foundation for this evidence-based practice. As if this alone was insufficiently serendipitous, further exploration revealed that Dr. Tyson was a professor at the one school I applied to and would now of course be attending. 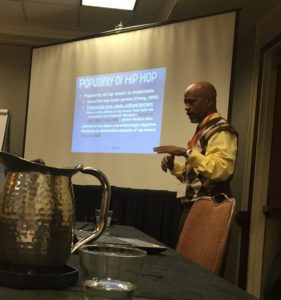 Dr. Tyson during our presentation on innovations in Hip-Hop Therapy at the Coalition of Juvenile Justice’s 2016 National Disproportionate Minority Contact Conference in Baltimore.

After carefully reviewing all of Dr. Tyson’s writings, I sent him a novel of an email explaining what Hip-Hop meant to me and the second wind I was given by his work. What began as a request to merely pick his brain grew into a long-term mentorship and close friendship. While developing Hip-Hop-based interventions during my two years as a clinical social work intern in East Harlem and the South Bronx, Dr. Tyson unwaveringly served as a touchstone through which I could reflect upon theory and best practices. Without his guidance, I would not be where I am today and would likely have given up on a career in social work. Stumbling across his research revolutionized the way I thought about therapy and established how I would eventually end up carving out a niche for myself within the profession. Dr. Tyson’s foresight and persistence established and continuously develops a foundation for me to build upon. His legwork is the reason I have had the ability to cut corners and sidestep structural obstacles that he himself had to face, especially the stigma associated with combining the terms “Hip-Hop” and “therapy,” each of which entails plenty of prejudice in its own right. 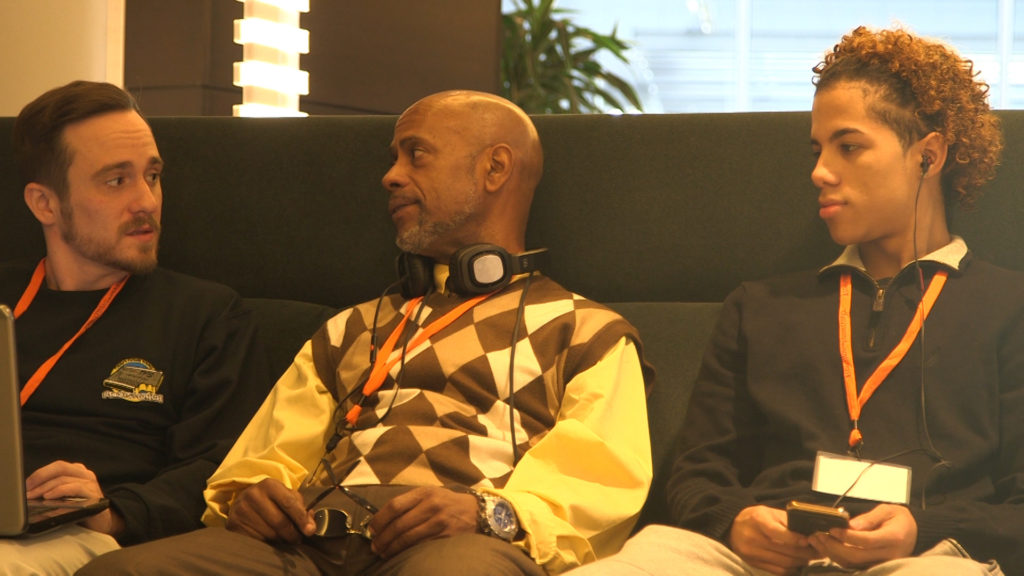 J.C., Dr. Tyson and Studio alumnus Jahleel Montero prior to presenting on innovations in Hip-Hop Therapy at the Coalition of Juvenile Justice’s 2016 National Disproportionate Minority Contact Conference in Baltimore. 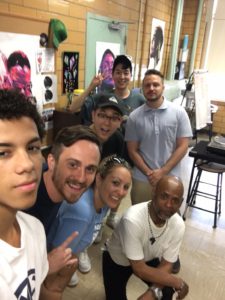 Group picture in the studio with students from South Korea who travelled to the US on a grant to study Hip-Hop Therapy, in hopes of replicating it back home.

Dr. Edgar Tyson first pioneered Hip-Hop Therapy (HHT) in 1996 while working in a residential facility for abused and homeless youth, and for 22 years he grounded this innovative approach in empirical research and methodology that he never stopped developing. HHT is a mental health intervention that incorporates the inherently therapeutic components of Hip-Hop culture within well-established models of therapy, from music, poetry and other expressive therapies to cognitive-behavioral and narrative therapy. HHT is a strengths-based, culturally competent framework that is uniquely rooted in the social work tradition with its focus on fitting the model to the client. In psychology and counseling, the goal is primarily to help a client develop strategies to adapt to the environment. Although this is also an objective in social work, effort is equally guided—if not more so—towards adapting the environment to the client through adherence to the principle of client self-determination and the hands-on employment of case management and advocacy. Social work distinctively takes into account the environment of the client as much as it does the individual and understands that individual change can often only be supported in so far as community change is also initiated. By adapting the environment—in this case, the therapeutic medium—to clients in order to best address their needs, interests and cultural identification, Hip-Hop Therapy is a quintessential example of social work practice.

Dr. Tyson and J.C. discussing the power of Hip-Hop Therapy at a Fordham GSS event in 2014.

Dr. Tyson passed away on February 24, 2018 at the age of 54. He was not even close to approaching his prime, and the world is at a loss for which I fear it may not fully comprehend. Two years ago, he asked me to contribute to a textbook on Hip-Hop Therapy that he had been working on for some time.  What began as him asking me to write a chapter evolved into him encouraging me to be a co-author, which has been one of the greatest honors of my life. Dr. Tyson passed a few months prior to completion, and his writings contain years of unpublished research and an expansion upon his groundbreaking model.  With the help of his family, I intend to see the project through, with the same layout and design as he originally envisioned.

In 2013, I was presented with the opportunity to build a recording studio at Mott Haven Community High School (MHCHS) by the founding principal, Helene Spadaccini, due to the success of my implementation of Hip-Hop Therapy with students up until that point. MHCHS is a transfer school in the South Bronx, which is the birthplace of Hip-Hop as well as the poorest congressional district in the country, and it serves overage and under-credited students who are two or more years off-track.Transfer schools are small, public schools that offer accelerated coursework and a chance to earn credits at a faster rate for disengaged students 16-21 years old who have either dropped out or fallen behind. 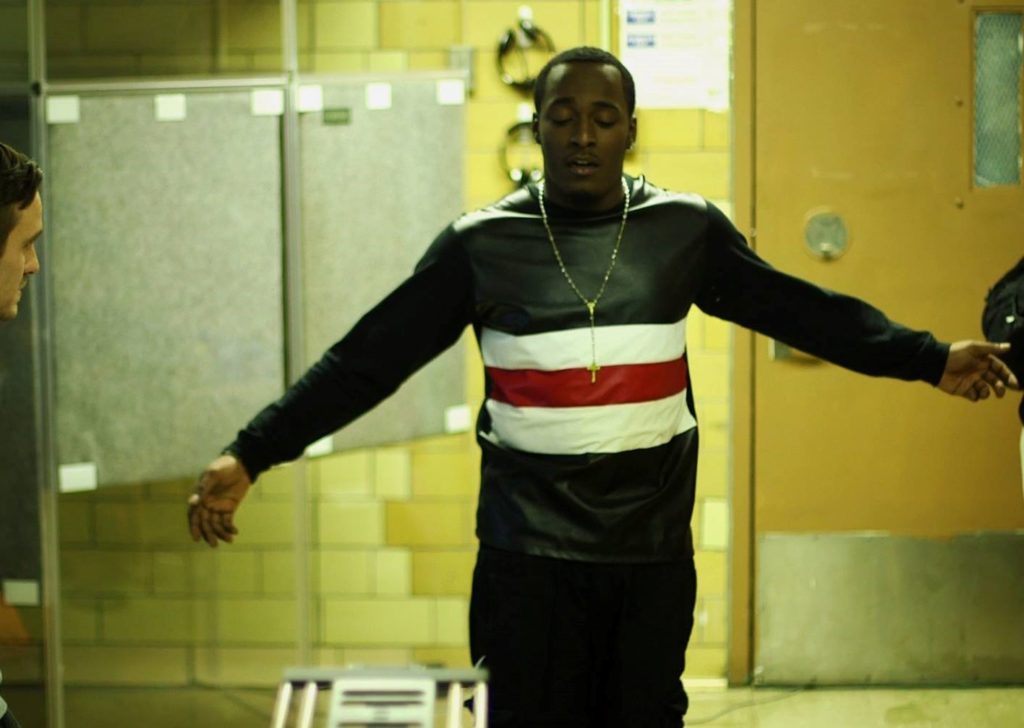 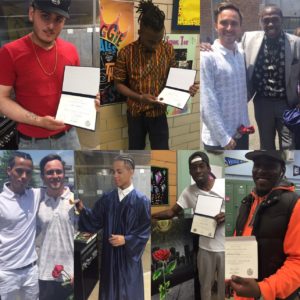 In my work, I have found that with a focus on fostering social and emotional development, as well as providing concrete services, students’ academics and attendance naturally follow suit.  If an individual has nowhere to sleep at night or returns to a home with an empty fridge, school is not on the top of his or her priority list.  Additionally, when intra- and interpersonal growth have been obstructed, a student’s performance will undoubtedly suffer. Several physical and psychological factors can lead to socioemotional difficulties, but of particular interest is the impact of trauma—from the personal to intergenerational and environmental.  In my experience, in order to even approach academic concerns, it is vital for mental health professionals to assess and address mental health needs first and foremost, and what better way to do that with youth than in a culturally relevant manner such as that of Hip-Hop Therapy? 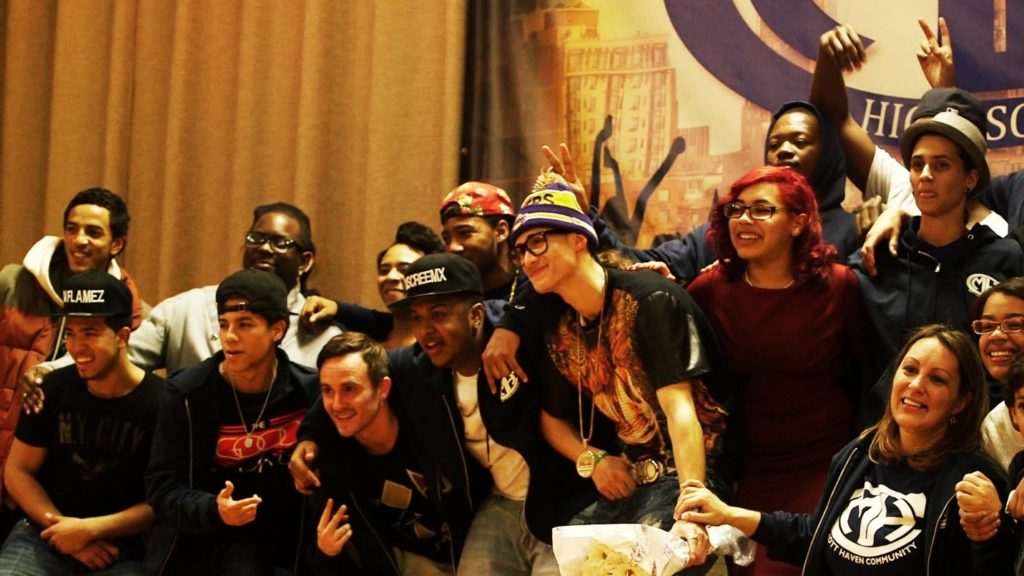 As the years have passed, the studio has expanded and the results have been expounded upon time and again. To this day, the studio is operational every day after school from 2:30pm until 6:00pm, providing students with a safe space for personal exploration and community development.  Not only does it help keep students off the streets, it provides them with highly specialized and marketable skills, all within a therapeutic setting. The program’s success has led to local coverage from WNYC and The New York Times, as well as other national and international outlets, such as Complex and The Independent.  In 2016, a brief video about the program was released by Russell Simmons’ Youtube channel, All Def Digital, and it provides a window into the daily studio experience.

In 2014, during the second year of the program, one of the founding members of the studio was stabbed across the street from the school and died later that night.  The studio is a family, and in the aftermath of this horrific tragedy, my colleague Kellyann Royce-Giron and I organized a student showcase in honor of his memory as a way for them to work through their grief and confront this senseless trauma.  The preparation, performance and its facilitation of community healing are chronicled in the award-winning short documentary entitled “Mott Haven,” created by my good friend Kyle Morrison. So far, “Mott Haven” has been screened at several reputable film festivals, winning Best Short Documentary awards at the 2017 Columbus International Film & Video Festival, 2017 Woodstock Film Festival, 2018 Santa Barbara International Film Festival and 2018 Phoenix Film Festival. 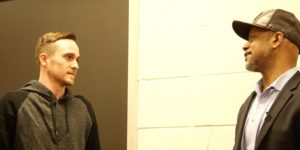 J.C. and Dr. Tyson after their heart-to-heart in “Mott Haven.”

Towards the end of the film, there is a heart-wrenching scene where Dr. Tyson and I are having a candid conversation, and he describes his profound reaction to the event and his sense of pride surrounding it.  Teary-eyed, he states that he cannot help but feel like he contributed in some way, and I can only hope that he believed me when I told him that I owed him everything.  Dr. Tyson is the giant whose shoulders I stand upon, and there is not a day that goes by that I do not think about how lucky I am to have had him in my life.  He was my mentor and collaborator, but more importantly, he was my friend. I owe him my life, in more ways than one, and getting to know him personally while being mentored through my journey, from coursework to practice and beyond, will forever be an immeasurable privelege of mine. Dr. Tyson’s legacy will carry on, and the reverberations of his ingenuity will continue to transcend time and space, much like Hip-Hop itself. 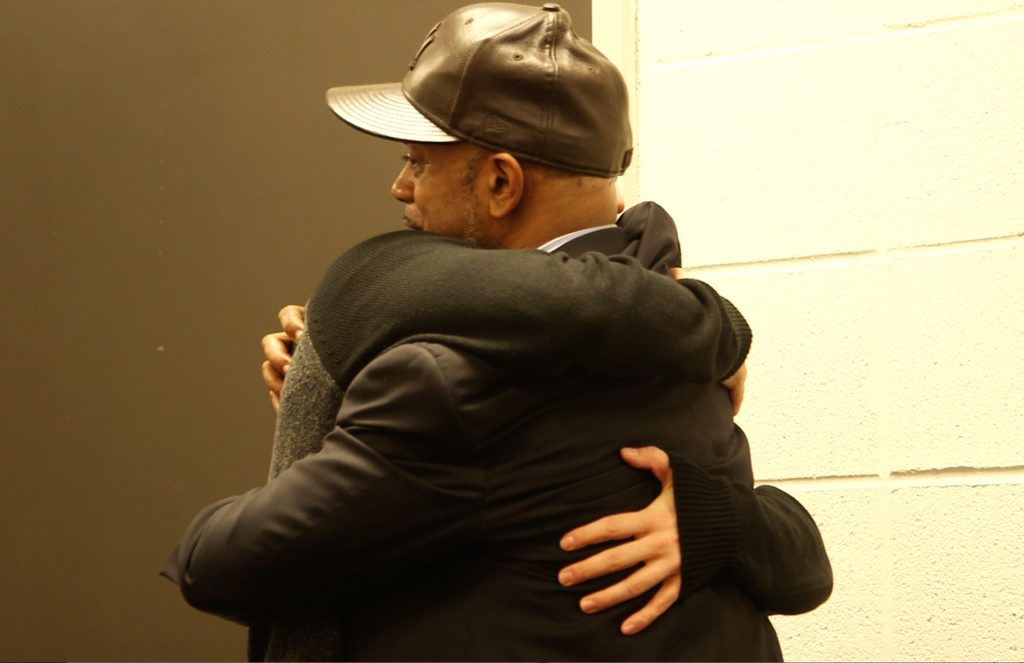