skip to main content
Return to GSS
You are at:Home»Faculty»Fordham Remembers Edgar Tyson: Pioneer of Hip-Hop Therapy
Story by Tom Stoelker & Photos by Janet Sassi – Inside Fordham
Edgar H. Tyson, Ph.D., an associate professor of social work, died suddenly of a heart attack on Feb. 24 at the age of 54. Tyson, who was perhaps best known as an early researcher and proponent of hip-hop therapy, combined hip-hop with social science to help young men in the inner city deal with loss.

“Through his unique academic and community work, Professor Tyson has contributed enormously to advancing knowledge and practice in the field of social work, but many other professions as well,” said Debra McPhee, dean of the Graduate School of Social Service. “Music was the vehicle, but Professor Tyson’s commitment was to engaging, educating, and intervening with at-risk youth and adolescents. He believed strongly in the healing power of engaging young people in deep and meaningful dialogue.”

A homegoing service will be held on Saturday, March 10, at 11 a.m. at First United Methodist Church, 145 Paulison Avenue, Passaic, New Jersey 07055. (973) 779-7521
Tina Maschi, Ph.D., an associate professor at GSS, said that Tyson’s work filled a gap in the scientific literature, particularly as it related to African-American young men processing grief.

“He found a way to talk to young men in a language that had meaning to them, and he used quantitative research to validate the work,” said Maschi.

She said that Tyson’s experience of growing up in the projects of Paterson, New Jersey, in the 1980s played no small role in his work. He confirmed as much in a 2011 interview with Inside Fordham.

“One of the key things in social work is having empathy, and an understanding about where a person is coming from,” Tyson said. “By the time I left Paterson, I had seen a lot. My first goal became to work with youth, because I saw too many of them land in jail, strung out on drugs, or dead over a dice game.”

Maschi said that Tyson understood that applying Freudian talk therapy in a classic manner wouldn’t work with his young clients. But he could get them to talk by using rap.

“He was way ahead of his time,” said Maschi. 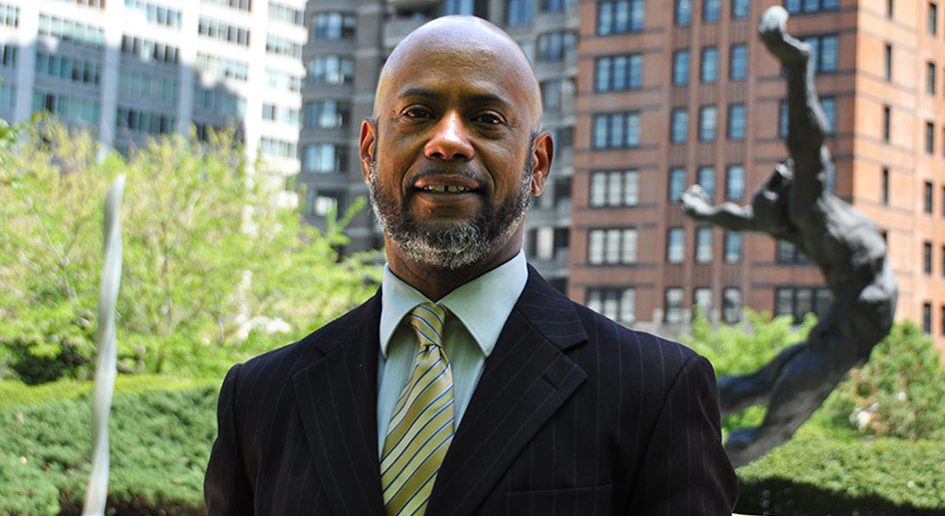 Tyson, pictured above, on the Lincoln Center campus in 2011 (Photo by Janet Sassi)

Tyson’s ability to communicate on an empathetic level went beyond his young clients; it also applied to fellow academics.

“He was a very down-to-earth guy who could speak via the academy using its language and speak to an inner-city youth using hip-hop,” she said. “He just found the humanity in anyone he spoke to, he didn’t seem to have a hierarchy.”

Nevertheless, understanding how to defend an academic argument in academic language didn’t necessarily mean that the academy would immediately accept his theories, said Larry Farmer, Ph.D., director of the doctoral program at GSS.

“He was looking at the impact that race and racism have on individuals, and that tends to be the kind of work where people question the legitimacy, in terms of its focus,” said Farmer. “But clearly his work was not focused on the negative aspects of hip-hop, like misogyny or the promotion of violence—but its ability to contribute to healing and wellness.”

Both Farmer and Maschi noted a “perception scale” developed by Tyson to measure the way the young people understood their experiences through rap, which further shored up the quantitative aspects of his work. His 2006 paper, “Rap Music Attitude and Perception Scale,” that introduced the studies that found a disproportionate amount of media attention accorded to gangsta rap. Tyson wrote that the scale represented a “necessary step toward a meaningful dialogue on how people from different groups, cultures, and countries interpret and construct the meaning of rap music.”

Farmer said the work represented a culturally responsive practice to engage youth within their own experience.

“It was an important kind of strength-based approach,” said Farmer. “It looked at what was valuable within the young African-American male and could be leveraged to help them address their own healing and wellness.”

After 10 years of practicing hip-hop therapy, Tyson began a textbook that outlined interventions using a model he called Hip-Hop Critical Consciousness Circles, or H2C3 for short. His fiancé Millicent Champaign said he was hard at work on the project well past midnight on the night he died.

“He was such a hard worker,” said Champaign.

She said that, in addition to his research and writing, he was a loving father to his three children, he volunteered for workshops at Rikers Island, and he “touched everyone he knew.”

“My nephews would come and visit us in Florida and he’d talk to them about being a young black man in society now, how to carry yourself and how to respect others,” she said. He talked about hip-hop with them, too. “He’d say ‘Some of what’s in the music may pertain to you, but you don’t have to go that route.’”

At the family’s suggestion, donations may be sent to the Boys & Girls Clubs of America.