skip to main content
Return to GSS
You are at:Home»News»New Fundraising Campaign to Focus on Student Experience 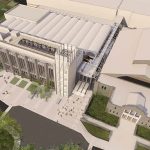 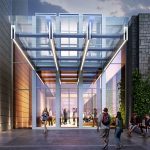 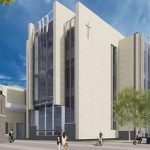 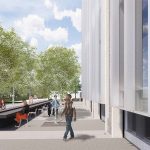 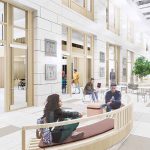 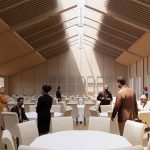 As Fordham celebrates the successful conclusion of Faith & Hope | The Campaign for Financial Aid, the University is transitioning to a new campaign dedicated to enhancing the overall student experience.

The centerpiece of the campaign will be a new campus center at Rose Hill that is scheduled to be completed in 2025. The campaign will also seek support for other student-focused issues like wellness, financial aid, athletics, and STEM facilities, which are being developed in the University’s strategic planning process.

“The new campus center will be bigger, both literally and in concept, than its current incarnation,” said Joseph M. McShane, S.J., president of Fordham. “It will be at the heart of the student experience campaign, and the student experience is at the heart of the University. In caring for the whole person, we want Fordham to be a place where students can live, learn, study, celebrate, dine, play, and perhaps most of all connect—with their peers and with the faculty and campus community.”

The campus center project, which the University began work on over the summer, will take place in two phases and cost an estimated $205.3 million. 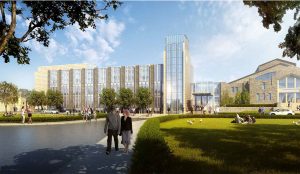 The campus center as seen from the South.

The first phase is scheduled for completion in August 2021 and will entail the construction of a roughly 75,000-square-foot addition in the area in front of the existing McGinley Center.

The sleek glass and stone addition will be connected to the existing structure via a two-story glass arcade, with elevated walkways between the two buildings. The glass canopy-topped main entrance will beckon visitors into an airy space between the Rose Hill Gym and the new addition. The center’s façade, once defined by the modernist arches of the McGinley building, will now be dominated by vertical, soaring windows and stonework that complements the neighboring Gym. In a nod to iconic Rose Hill structures such as Keating Hall and Duane Library, it will also feature a four-story illuminated tower immediately to the west of the entrance.

Once the addition is complete phase two will begin, and the existing structure, which was built in 1958, will be gutted and renovated. When it is finished, it will feature 22,000 square feet of dining facilities and 36,000 square feet of state-of-the-art sports and fitness facilities. Ultimately, the new campus center will be much larger, encompassing more than double the space of the original building. It will also include efficient LED lighting, heat recovery systems, enhanced insulation, solar panels, and other features designed to lower its carbon footprint.

The expansion will allow for a dramatic increase in space for several areas. The 20,000 square-foot fitness center will encompass more than half of the basement level, while more than 16,000 additional square feet will be devoted to sports medicine and a varsity weights training center. Career Services, the Center for Community Engaged Learning, and Campus Ministry will be housed in larger offices on the first floor of the addition. A 9,500-square-foot student lounge will occupy the second floor of the addition, while the third floor of the addition, which will rise a floor above the existing McGinley Center, will feature space for meetings and special events.

Funding for the Center 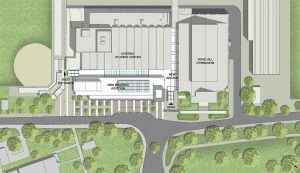 An aerial perspective of the addition, the current McGinley Center, and the Rose Hill Gym.

Funding will come from a combination of fundraising, loans, and dining services provider Aramark, which has committed $13.3 million toward the renovation of the dining facilities. Fordham will borrow $150 million through a bond offering, and raise up to $85 million for the project through the next capital campaign.

Together, nine donors have already committed $10 million toward the Campus center. Maurice J. “Mo” Cunniffe, FCRH ’54 and Carolyn Dursi Cunniffe, Ph.D., UGE ’62, GSAS ’65, ’71, whose generosity in the previous campaign led to the creation of the Maurice and Carolyn Cunniffe Presidential Scholars Program, has given $3 million.

The center will feature many spaces with naming opportunities. Among the high-profile spaces in the new building are the fitness center, arcade, career services space and special events space. When refurbished, the original building’s main dining room, ballroom, and student affairs suite will be available as well. 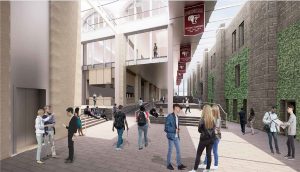 A view from the atrium, just inside the main entrance. The Rose Hill Gym is to the right.

The bulk of the funding for the project will come from a loan that the University will take on through a bond offering via the Dormitory Authority of the State of New York.

Martha K. Hirst, senior vice president, CFO, and treasurer, noted that Fordham is able to do this in part thanks to the University’s solid financial footing. Last month, for instance, global rating agency Standard & Poor upgraded its outlook on Fordham from negative, which it issued in 2017, to stable, and affirmed its “A” long-term rating on outstanding bonds. The University previously borrowed $212 million in 2008 via bonds for the construction of the new Law School building; Hirst said it continues to be the best way to finance big projects.

A Focus on Students

Jeff Gray, senior vice president for student affairs, said the new campus center will dramatically increase the ability of the University to deliver the services and spaces that students need to thrive.

“We have clearly outgrown the current campus center over the years, and it’s going to bring online a lot of exciting new spaces that will improve the quality of life for all our students,” he said.

He noted that in recent surveys of students at Rose Hill, 60% indicated that current student club and programming spaces are inadequate for their needs, which is not surprising given that the center was built to accommodate just 2,500 undergraduates total, 850 of whom lived on campus at the time. Today, 3,500 students live on campus, another 1,000 live in off-campus housing, and another 2,000 commute to campus. The new campus center will be a place where all of these students can come together to socialize and collaborate.

Facing west in the arcade separating the addition (left) from the existing McGinley Center, right.

For a preview of the benefits to come, Gray pointed to the 2016 renovation of the garden level of the Lincoln Center campus’ 140 W. 62nd Street.

“They’re all located in that hub, and that’s had a very palpable, positive impact on the quality of life for our students at Lincoln Center. We hope to achieve some of the same benefits at Rose Hill on a larger scale.”

Studies have shown that the longer a student remains on campus and in an academic mindset, the greater their chances are for academic growth and success, Gray said, noting that student retention is a key priority for the University. The new campus center at Rose Hill, he said, will be designed to give students a better sense of place outside the classroom.

In addition to dining, fitness, student lounge, and career services spaces, Gray said he expects that students will benefit greatly from the improved office spaces for departments such as Campus Ministry, the Center for Community Engaged Learning, and the Office of Student Involvement, which supports student clubs and activities.

“Those services are certainly central to our mission and what we do, and I think all of those things have the net effect of improving the overall student experience for the students,” he said.