skip to main content
Return to GSS
You are at:Home»News»Fordham Strengthens Identity as Changemaker Campus

Five years after Fordham joined the AshokaU network and committed itself to changing the world through social innovation, the University has been lauded for its efforts and renewed its designation as a “Changemaker Campus.” Forty-five other colleges and universities around the world are part of AshokaU, a global organization that honors universities for innovative efforts to foster social good and strengthen society.

Donna Rapaccioli, Ph.D., dean of the Gabelli School of Business, said the renewal, which takes place every five years, is a testament to Fordham’s dedication to coordinate resources from across the institution and focus them toward improving the lives of others.

“It’s external validation of the fact that we’re living our mission. When you look at what AshokaU is doing, it’s really holding us accountable to educate change leaders. That’s what Fordham is really about—educating students who will make positive change,” she said, noting that being a member of the network also allows Fordham to tap into resources of universities around the world that have similar missions, visions, and goals. 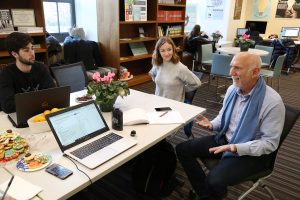 One of the highest-profile changes to take place at Fordham as a result of the partnership with AshokaU was the creation of the Social Innovation Collaboratory. Housed within the Gabelli School of Business but open to the entire university community, it hosted 10 social innovation applied learning and action research groups last year. The groups, which comprised 131 undergraduate and graduate students, focused on topics such as financial inclusion, sustainable fashion, climate impact initiatives, diversity, equity and inclusion, and social-impact storytelling.

AshokaU noted in its renewal letter that Fordham has shown its commitment to social innovation in multiple ways. Last fall, the collaboratory’s steering committee, which is co-chaired by Maura Mast, Ph.D., dean of Fordham College at Rose Hill, and Dean Rapaccioli, was reformulated to include more senior leadership. In March, a new assistant director position was filled at the collaboratory, and a part-time communications position will also be filled in the near future.

Fordham has also begun using a Kumu visual map to match students with opportunities for social innovation throughout the University’s schools, departments, and centers.

“It shows you the network of different things that are going on. It will help us identify the various entry points that students can take, whether it’s curricular or co-curricular, to engage in social innovation efforts,” said Lerzan Aksoy, Ph.D., associate dean of undergraduate studies and strategic initiatives and professor of marketing at the Gabelli School.

“It’s a kind of GPS for the students.”

Winner of the Fordham Foundry’s annual Venture Up competition, which was held in December at the Lincoln Center campus.

The Ground Floor, a course that is offered to every first-year student at the Gabelli School of Business, was also retooled last fall to have a greater emphasis on social innovation. Working with mentors from the Fordham Foundry, students in the class are now tasked with forming a plan to address one of the United Nation’s Sustainable Development Goals. At the end of the semester, the plans are entered in a contest co-sponsored with PVH Corp., and the team with the best plan is awarded a $2,000 prize.

Aksoy said a good example of the direction Fordham is heading is the Ignite Scholars program, which the Gabelli School launched last year. To be admitted to the program, students must demonstrate leadership skills as well as academic success. Starting a business is one example of leadership; taking action to improving their community is another.

Resilience is a big part of the Ignite program. Associate professor Yuliya A. Komarova, Ph.D., has been organizing workshops on resilience with students, and on Sept. 26, Gabelli Social Innovation fellow and Nobel Peace Prize co-recipient Jerry White will conduct a workshop on personal transformation.

“His story is really inspiring; he worked with Princess Diana on eliminating landmines, and was himself the victim of a landmine,” Aksoy said.

“It’s not just about academics,” she said, “but also about building these really important skills and mindsets in our students.”