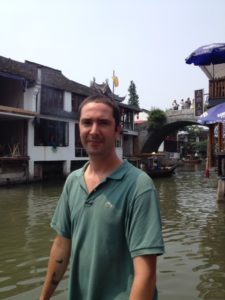 Let it be said at the outset, China is a fantastic country to visit. It’s beautiful, safe, educational, humbling, and a more easily accessible country than most people think. And, as a student, there will probably never be a better time to go. Although China is far away– and because life seems to only get more complex the more we put things off and the older we get– going to China now while you are all relatively young through Fordham University GSS is an excellent opportunity.

To be honest, I never thought about visiting China until the opportunity arose late last spring, and I thank Fordham GSS for that. Like most North Americans, my history classes only dabbled in the cultures of other countries when they dabbled in them at all. Some ancient Egypt and Mesopotamia was studied perhaps, as well as Europe, but nothing about the history of Asia, Africa, Oceania, or South America. I always figured that because China is literally on the other side of the planet, I’d get there “one day when I’m older.” Fordham gave me the opportunity to go to China at an affordable cost, and I received a quality education while engaging in tourism activities. Not a bad deal… It was an opportunity that I grabbed, because I wasn’t sure when (or if) a similar opportunity would present itself later on in my life.

I spent three weeks in Beijing, one week in Shanghai, and another few days in Hong Kong. During this time there were several day trips and weekend excursions, including visiting the Terra Cotta Warriors in Xi’an, the Great Wall, Tiananmen Square, the Forbidden City, numerous historic temples, Mount Victoria, Stanley– the list is huge. The weather was beautiful– in the 80s and 90s every day– and I got to see rural parts of China on the numerous train trips I embarked on. I was always greeted warmly, was spoiled by the students and teachers I met and had, and felt I was genuinely respected as a foreigner. I learned so much from the course I took from my Fordham professors and from the social agencies I visited. The agencies were always thoroughly prepared for their western visitors, and they displayed remarkable leadership within their communities. I was honored to have been a part of this first-ever Fordham student exchange program, and I will always remember the thoughtfulness, genuineness, understanding, and kindness the professors and faculty members at the university in Beijing displayed. They were all class acts, just as the students I met. If I could only return one-tenth of their kindness….

It is a strange concept to think that many of our friends are people we would never have met had certain instances not occurred. If I had chosen not to take Fordham up on the China Summer Study opportunity, I never would have met the two wonderful teachers I had there, the two fellow students I traveled with, and the eleven amazing  Chinese students who are all now a part of my life. I went to China with people I had never met, met them and many others once there, and formed friendships which never would have been created had I not taken the chance to go.

Travel is an educational activity. Indeed, travel IS education.

Think of such a trip as a way of breaking down one’s comfort zone, because in a philosophical way which I cannot explain, it’s good to disrupt one’s routines every once in a while and to challenge oneself. Being comfortable in daily routines can become too comfortable. We tend to take things for granted after a while, without encountering some form of challenge in our lives. Traveling to visit other cultures and people broadens the mind and enriches us as human beings. On the other hand, going to a country like China will quickly teach one that the trip isn’t so much a challenge as it is a pure joy: the people, the languages, the foods, and the scenery. I’d go back in a second.

Why would I encourage a student to go to China next summer? There are many reasons, but they all come down to this…Who knows what kind of opportunities such a trip could open up? At the very least you will return from the trip with a stronger sense of who you are, a better sense of an adventure successfully completed, a stronger understanding of what you value in your life, and ultimately, a respect and appreciation for another culture and group of human beings which you would not have been able to get from any textbook or film.

Think about visiting China this summer through Fordham GSS. Kill two birds with one stone by earning credits and (more importantly) exploring a remarkable part of the world which many people may never get to see. You only live once!