skip to main content
Return to GSS
You are at:Home»News»Student Entrepreneurs’ Pitch Contest Carries On Virtually

When Hayley Leviashvili, LAW ’20 was in her first year at Fordham Law School, she wanted to pursue a career that combined human rights and entertainment. So she cold-emailed entertainment lawyers to ask if she could pick their brains for ideas. That landed her an internship at Warner Brothers and showed her the value of reaching out to specialists in the law field. But it also gave her a good idea.

In March 2019, Leviashvili was still reaching out to lawyers for advice, and connected with a lawyer who specializes in cryptocurrencies like BitCoin.

“He said, ‘you know, I’m a sole practitioner, I can definitely use some legal work. I could use legal assistance from a law student. I don’t have the overhead to be able to bring you on full time, but would you be willing to do project-based work for me?’” she said.

And with that, GigLaw was born. 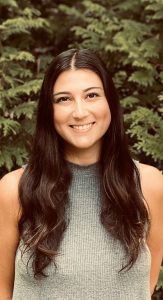 Leviashvili went on to recruit nine more clients like that lawyer, and she was able to use the revenue to completely pay off the tuition of her final year of law school. She’s now ready to scale up to include others, having won the Fordham Foundry’s fourth annual pitch challenge. The competition, which culminated with a live Zoom meeting on April 4 in which finalists made their cases to judges, featured 115 participants from 38 teams from around the University.

Because contestants were unable to make their pitches in person, the first two rounds of the competition were held asynchronously, with teams submitting three-minute-long videos that judges could weigh in on at their convenience.

While SwapUp describes itself as a “circular fashion company” that allows consumers to swap special occasion clothing based on a credit system, BeautiMaps is a global freelancing platform tailored to the wellness and make-up industry. Shadow Me is job shadowing platform that connects students with career professionals to help them find their true calling through on the job experiences.

The social impact award was given to North Node, a platform for connecting volunteers to nonprofit institutions run by Gabelli School EMBA students Hallie Anderson, Emily Penzo, and Doug Wallner.

The winners were announced at the end of the final round of the competition on April 4, and invited to a May 1 meeting with Fordham Provost Dennis Jacobs, Ph.D., and Donna Rapaccioli, Ph.D., dean of the Gabelli School of Business.

Al Bartosic, GABELLI ’84, the Foundry’s executive director, said the Foundry briefly considered canceling the pitch contest because of the COVID-19 pandemic. Ultimately, he said, he realized that entrepreneurial spirit is exactly what is needed now.

“In this environment, everyone’s an entrepreneur, right? Because no matter what you’re doing, you’re improvising on the fly, you’re pivoting to figure out what works and what doesn’t, and you’re trying to see what’s effective,” he said.

“Whether you’re trying to reopen a university or start up a business, all of these things really come to the fore right now.” 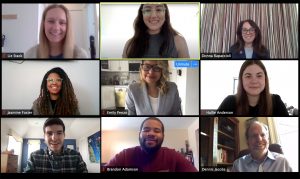 On May 1, winners of the pitch competition met with Fordham provost Dennis Jacobs to tell him about their business ideas.

Although the Foundry had no experience with holding a large event via Zoom, Bartosic said he was very proud of how it ultimately pulled it off. Among the tools they employed to keep it interesting was an interactive tool that gave audience members an invisible pot of $25,000 to invest in whoever they were most interested in.

He also found a silver lining in the new format: access to representatives from private industry that might not have been able to make it if the competition was held in person.

“We had two judges in California, we had a judge in the first round who was in Hawaii. We got the benefit of their expertise and insight, and these were people we’d asked before if they could come and be a judge, and they said their schedule wouldn’t allow for it,” he said.

Equally exciting, he said, was the breadth of talent that the contest drew from the University. He credited the Office of the Provost for spreading the word via several emailed solicitations earlier in the year. The pitch challenge drew teams from Fordham Law School, the undergraduate and graduate divisions of the Gabelli School of Business, and in a first, the Graduate School of Social Service. Leviashvili is the first Law School student to win the contest.

“It really changed the scope of the playing field,” he said.

Very few of the entries required major retooling in light of the pandemic, which also gives him hope, he said

“All four of the businesses that were in the finals were really all about using technology that makes problem-solving more efficient. I think that’s kind of a foreshadowing of what’s happening now, post-COVID-19, which is figuring out how to use new virtual realities to get some of these needs met,” he said.

A Boost of Confidence

Leviashvili said she knew that the success she’s already had with GIGLaw factored in her win. success. But it would have been worth going through the process even if she hadn’t won. She plans to used her $9,500 prize money to fund the design and launch of an online platform in the fall that will connect students with firms interested in 13 areas such as intellectual property law, start-up law, trusts and wills, bankruptcy, energy law, entertainment law, and technology law.

She said praise from judges from places like Adobe and venture capital funds was the “nail in the coffin” for a more “traditional route” she might have once been considering, like corporate law. “It gave me this boost of confidence that I absolutely wouldn’t have had before.”