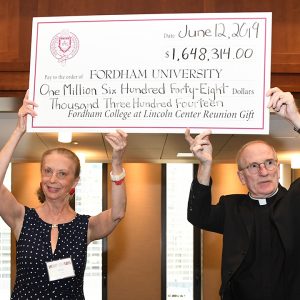 Delia Peters, FCLC ‘85, and Father McShane hoist the reunion gift of more than $1.6 million raised over the past five years by Fordham College at Lincoln Center alumni.

In welcoming alumni to the Lincoln Center Block Party on June 12, Joseph M. McShane, S.J., president of Fordham, described a close community “composed of scholars and learners” near the center of New York City.

“This is one of the things that’s apparent every time I’m in the building; it’s apparent when I’m in the elevators in a special way,” said Father McShane at the reunion celebration. “This is a community that takes building community and sustaining community very seriously.”

Many alumni in attendance noted that while the campus’ location gives students unparalleled access to culture and commerce, it also creates challenges in forming community amidst the bright lights of the big city.

Friends to Rely On

Jamie Rodriguez, FCLC ’14, said that when he moved to the city from Connecticut, his first two years were spent out and about town. While he was involved in the community, it wasn’t until he was an upperclassman did he fully embrace the campus.

He credited his classmates with getting him involved with the Jesuit Volunteer Corps, which took him to Atlanta, Georgia, for three years after graduation. On his return, he once again turned to his former classmates for community. And, more recently, when he was diagnosed with a chronic illness, his Fordham friends once again stepped up.

“My Fordham community were the ones who went to any fundraisers I was having in the city, and they were very much the ones who helped heal me,” he said

Rashid Davis, GSE ’03, said the notion of community rests in education, which goes beyond any one location. Davis received the Lifetime Achievement Award from the Graduate School of Education at their Block Party reception. He is the founder of P-TECH, a career and technical high school that was visited and praised by President Barack Obama, who lauded its high graduation rates, high college acceptance rates, and career opportunities through the school’s IBM partnership. Today more than 100 schools nationwide use the P-TECH model.

“When we’re talking about community building it always goes back to education,” he said.

He said that at GSE he was in a cohort which required students to operate in teams.

For Michael Koczko GABELLI, ’91, ’93, a vice president of state and local tax at CBS, the required core courses in theology and philosophy provided him with an understanding of how businesses can foster community simply by paying their fair share.

Though he’s not necessarily consciously thinking about the classes he took on Socrates and Picard, he said, “it’s there,” in his mind, influencing his thoughts. “Part of the idea is that corporations and the individuals are the citizens of the world and the money that gets taxed is for the services that the government can provide.” 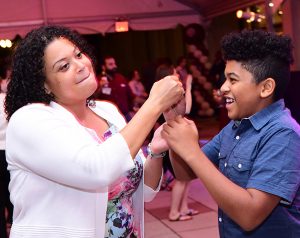 Maria Ortiz, GSS ’13, it would seem that the notion of community is a no brainer. She serves as co-chair of the housing committee on Community Board 4, which serves Hell’s Kitchen. She grew up behind the Lincoln Center campus in the Amsterdam Houses. And she works as a forensic social worker at the Legal Aid Society. But she said she never tapped into the Fordham community until she began at the Graduate School of Social Service.

“I really feel a connection to Fordham thanks to Elaine Congress and Susan Egan,” she said of the school’s associate dean and former associate dean, respectively. “I consider Elaine a mentor. I shared a paper with her about growing up and my humble beginnings and she actually teared up.”

For one alumnus, the community connection was to Fordham as a whole—not just Lincoln Center. Michael Chavers, PCS ’12, began studying at Marymount College in 1982 when the all-women college offered co-ed weekend courses for working adults. He took classes every other weekend and could stay in dorms on the Marymount campus.

Besides taking technology courses to buttress his career as computer programmer, there were other benefits of attending Marymount. It was there that he met Michele Holmes Chavers, MC ’99.

“I decided to stay in the dorms that fall and who stepped off the elevator in the science building but my future husband,” recalled Holmes Chavers.

By 1985, Chavers’ career hit high gear and he was off to other cities. When he returned to Marymount, its transition to becoming a part of Fordham had already begun, so he transferred his Marymount credits to Fordham and took classes at the Westchester campus on the weekends through the School of Professional and Continuing Studies (PCS). He would go on to take classes with PCS at Rose Hill and finally at Lincoln Center—making him one of the very few to take classes at all four campuses.

“I really got a charge out of it. I was the first male student that helped create the ambassador program for career services [at Marymount]. I volunteered because I felt so good in my heart about Fordham.”