skip to main content
Return to GSS
You are at:Home»News»Finding a Path Through Trauma: Five Questions with Carolyn Pagani
Carolyn Pagani in Budapest. Photo by Frank Pagani

On the morning of July 5, 1981, when Carolyn Pagani was just 31 years old, she woke up paralyzed on one side and blind in one eye.

Just a few years before, Pagani had started feeling strange intermittent symptoms—numbness in her legs, tingling in her arms and torso, vertigo, and loss of taste, sense of touch, and hearing. After being told by several doctors that what she was feeling was either emotional or imaginary, one finally guessed that what she was suffering from was multiple sclerosis. MRI scans were not widely available at the time, Pagani explains, so he couldn’t confirm the theory. “But he thought it was my first exacerbation. I was in my 20s and burning the candle at both ends, but he told me to take a month off and do nothing.”

So she did, and her symptoms went away—until that morning in July a few years later, when everything changed. “It took a year to start coming back from that attack,” Pagani says. But she also credits that time with leading her to Fordham’s Graduate School of Social Service.

Pagani had studied psychology at Boston University, graduating with a bachelor’s degree in 1970. She knew she eventually wanted to enroll in a graduate program, but she also felt she had limited options. “There were really only three career tracks you took as a woman at that time,” she says. “The sight of blood made me shake, so nursing was out. I knew I wouldn’t be able to travel like I wanted to if I became a teacher. So I became a secretary.”

Pagani postponed graduate school for several years, until she became symptomatic. “I started peer counseling in between attacks and hospital stays, and I knew I wanted to study social work. So I said, ‘This is it. Once this damn disease stabilizes, I’m going to grad school.’

“I had to turn a negative into a positive,” Pagani says. “It sounds trite, but that’s how you survive.”

A friend who was pursuing a Master of Social Work at Fordham, Joyce Genovese Drummond, GSS ’89, encouraged her to consider the program. In her late 30s and with her MS under better control, Pagani began to pursue her dream.

For her, it was more than just the academic strength of the Fordham program that changed her. It was the way the faculty and staff supported her when she had recurring MS attacks or when she doubted herself. You would never know it hearing her now, but back then she felt the disease had sapped her of her characteristic energy.

“I thought my life was over; I didn’t have any confidence in myself,” Pagani says. “And at Fordham I had people cheering me on.” 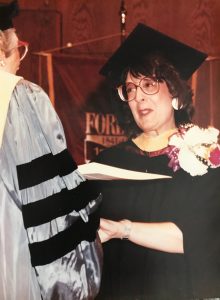 After graduating in 1991, Pagani joined the staff of the Jewish Guild for the Blind as the only social worker at the nonprofit’s Yonkers location, where she worked until her retirement in 2014. “Helping people maximize what they’ve got even in the view of different abilities energizes me,” Pagani says of her chosen career path, which was informed by her own struggles. “Yes, you’ve lost a lot. But there are things you can do.”

The Westchester native has also stayed in touch with Fordham throughout the years. A lifelong theater buff, she has particularly enjoyed taking advantage of the numerous cultural and entertainment events sponsored by the Office of Alumni Relations, including a special tour of the American Museum of Natural History in January. She has also been recognized as a member of the 1841 Society for her generous decision to include Fordham in her will, and has attended the group’s annual luncheons.

Pagani says she hopes to keep giving back to Fordham and to her local community. “I want to ramp up my volunteerism,” she says.

“I want to be connected on a deeper level. These places have played so heavily in my life. And I’m not even close to being done yet.”

What are you most passionate about?
Seeing the results of my mentoring. For at least 15 years, I had social work students as interns, and teaching them was a big aspect of my job and my life. I’m still in touch with many of them. Some were challenging. But when you have good experiences in life, you don’t hold them inside. You have to pay it forward.

What’s the best piece of advice you’ve ever received?
My mom, who used to call herself “a wise old owl,” was an extraordinary role model. If not for her and my dad, I could have succumbed to the MS, because I had some pretty dark years. But my mom always told me not to give up. “Don’t give up, because there’s always something you can do,” she said. And boy was she right. Years later, my neurologist told me that he didn’t think I would ever be able to walk again. But I did. And I attribute that to the love that surrounded me and to my mother.

What’s your favorite place in New York City? In the world?
Lincoln Center for the Performing Arts is definitely my happy place. That and the Theater District. The arts, the restaurants—oh my God, it’s the arts capital of the world. The energy is unrivaled. It really is. You just feel it.

I’ve traveled a lot, so it’s tough to pick a favorite place in the world of all the places I’ve been. I’ll give you my favorite place and the one that made the biggest impression. For my favorite, there is a place my cousin took me in France. I have cousins in Paris and in Provence, and they take me places that other people just don’t know about. The last time I went they took me to a place called Carrières de Lumières, the Quarries of Lights. It’s a huge, huge cave in the Provence area—which is one of my favorite places—and you enter the cave and there is an art show projected onto the walls, all set to music. And they do different themes. It’s a totally immersive experience that I’ve never had anywhere else. It’s amazing.

But there are also some trips that impress you and stay with you always in a different way. Like last May, we went on a cruise through six countries in Eastern Europe: Czech Republic, Croatia, Serbia, Romania, and Bulgaria. And when we were in Budapest, along the Danube—I’m emotional talking about it—there is a memorial. You see along the river a line of iron shoes that go on for what seemed at least half a mile. And it’s in honor of the thousands of people shot by the Nazis on the bank of the Danube, who were made to take off their shoes before they were killed. They made a lasting sculpture to these souls. That made the biggest impression on me.

Name a book that has had a lasting influence on you.
I have a few. The first is one I was assigned in my clinical psychology class at Fordham, Listening with the Third Ear by Theodor Reik. I never, ever forgot that book. I still have it on my bookshelf, and I continue to lean on it throughout my life in different situations. It’s about listening to what somebody’s not saying to you. It’s me with my work and my relationships, and I think it’s indispensable for anyone in a helping profession.

The other two are both historical novels: The Devil in the White City by Erik Larson and All the Light We Cannot See by Anthony Doerr. The first made me wish I lived in the 1890s so I could have seen the Chicago World’s Fair. That they were able to do this, this incredible creation against all odds—that sort of thing really impresses me. The second is about a blind French girl and a German soldier against the backdrop of World War II, and I loved it so much that when we went to France I took two or three trains from Paris to get to the little town it’s set in, Saint-Malo.

Who is the Fordham grad or professor you admire most?
Marc Miringoff, who was the dean of students for GSS when I was there, and his assistant, Amy Miller. One of my first classes was with Marc, Social Policy. It was a class nobody wanted to take, because it was dry, but he instilled such humor into it. He was a terrific professor. He gave me my first A, and that meant a lot; it helped me keep going. I didn’t know if I could do it at that point, I felt I had so many strikes against me. Marc also used to host a folk night on Fridays, and even though I hate folk music it led to incredible bonding for all of us at the time. He made everything fun. And I was always in Amy’s office, telling her when I wasn’t sure I had the energy to do this. She showed me I could. They helped me on my way and had a tremendous impact on me, the two of them.