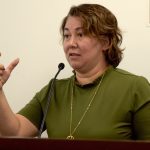 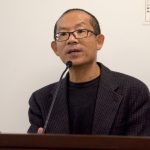 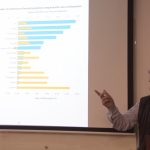 More than three million people are seeking asylum worldwide. The number of refugees across the world—25.4 million—is even higher. But there is another number that skyrockets above both statistics: the 40 million internally displaced people around the world.

“This does not sound nearly as riveting or contentious as migrants and refugees,” said Rene Desiderio, Ph.D., a research fellow at Fordham’s Institute of International Humanitarian Affairs. “Yet internal displacement has become a global crisis.”

The largely invisible story of internally displaced persons—those who have fled their homes in the wake of natural or man-made disasters, violence, or persecution, but, unlike refugees and migrants, still live within their native country—was the focal point of a lecture on Monday, Oct. 22, at the Lincoln Center campus.

“Just imagine yourselves in this situation, where you have to flee your home for safety elsewhere,” Jimenez-Damary said. “What are the things that you will bring with you? What are the things you will leave behind? This is not a theoretical question, because millions of people have experienced that.”

Jimenez-Damary said IDPs exist everywhere, not just in poor countries. One example is post-2011 Japan, after a tsunami and nuclear disaster hit the Fukushima Prefecture. Another is Mexico, where drug cartels are taking over the land of indigenous people, she added.

Internally displaced persons face a plethora of problems: marginalization, exploitation, abuse, discrimination, malnutrition, disease, Jimenez-Damary said. They receive no international protection, unlike migrants, asylum-seekers, and refugees, since they haven’t left their native country. For those who have no home, it’s easy to lose track of important documents like passports, school records, and land titles, she said. And, she added, the majority of IDPs live like this for decades: Two-thirds of IDPs are displaced for an average of 20 years.

“What do 20 years mean? It’s a lost generation,” she said. “For those who were children when they were displaced, or they were born in displacement, there is a 66 percent chance that they will remain displaced until they reach adulthood.”

Jimenez-Damary suggested several solutions, including a shift from the prioritization of national sovereignty to human rights and more scholarly research about the IDP community.

“How can you follow up with the people [IDPs] ? You don’t know where they are,” she said. “We are working in communities in which post offices are not a concept. Streets do not have names. You really need to work with networks of organizations and communities on the ground.”

In the meantime, we need to design better policies that create safe spaces for vulnerable people and give more attention to topics that aren’t deemed “immediate needs” by the government, like women’s reproductive health, Popescu said.

Chen, a counseling psychology professor who researches the educational and career goals of legal and undocumented immigrant students, added that it’s important to also consider the IDP community’s mental well-being. Once basic human needs—clean water, food, and shelter—are taken care of, how do we help IDPs recover from their trauma?

“What can we do to help them make sure that they can continue their own recovery process?” he asked, placing emphasis on teenagers, who are trying to negotiate both their identity and hormones amid a tenuous living situation. (Support groups are one potential solution, he added.)

Safety First, but Then What?

Many IDPs are fleeing to urban areas, where they have more anonymity—and, most importantly, safety, said Jimenez-Damary. But once they find a safe place to settle, they face another issue: how to build a new life.

Decorte, who works with urban initiatives in countries that face conflict and crises, showed the audience a photo of a Syrian man holding his two children by the hand, surrounded by their neighborhood—a pile of rubble and crumbling buildings.

“Safety is his first concern. His second concern is restarting his life. And the question is where?” Decorte asked.

There is potential for affordable housing in cities, he said. But there’s still work that needs to be done. We need to work with systems that shape cities—the government, society, markets, and infrastructure, help local governments better understand the issues at stake, and ensure that areas heavily populated with IDPs are able to sustain their rapidly growing population.

“Among the most vulnerable,” said Popescu, “you will always find another group of even more vulnerable people.”