On Wednesday, April 25, I accompanied Dr. Susan Egan to Albany with a few MSW students for an NASW-NYS student advocacy event. Legislation, Education and Advocacy Day (LEAD) was a fantastic opportunity for our students to engage in advocacy and canvassing at the State Capitol with NY State Officials. The students campaigned to advance legislation that prohibited “Conversion Therapy” from being practiced by licensed mental health professionals. Four of the students who attended wrote up short notes describing their experience.

I’m really glad that I attended LEAD with the Fordham MSW program. It was really a great experience. I met with Assemblyman Jose Rivera, who showed us what it was like to be a part of the assembly. He took us into the hearing room while voting was in session. There we were able to see how to vote on bills. Assemblyman Rivera introduced us to other members of the assembly. He also gave some great historical facts on some of the assembly members that he works with. Mr.Rivera allowed us to sit in on a meeting where a group of doctors proposed an amendment that they had for a bill for medical billing. He allowed us to ask questions about the proposal. This was all around a great learning experience, and it allowed us to see a social workers roll in advocating to help pass things that can improve the quality of life for individuals. I suggest that any MSW student who is leaning toward a career in policy attend LEAD, and meet with the senate and the assembly. It is a great learning experience that I will never forget. I really appreciate this experience and I look forward to returning in 2019 with Fordham. 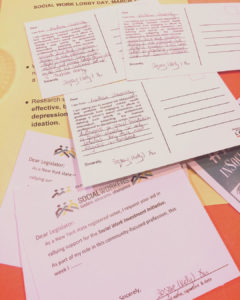 I think the most interesting part of the trip for me was the process of preparing canvassing. Before the formal canvassing, my group and I needed to prepare canvassing cards and notes. I didn’t know what conversion therapy was before I took part in 2018 LEAD. I Googled the term “conversion therapy” and figured out the definition and history of it, as well as the medical, scientific and legal views of it. I shaped my canvassing points around the fact that differences in sexual orientation or gender identity are not disorders, and they don’t need diagnosis or treatment. During the process, I also had the opportunity to communicate and discuss with other group members. We expressed our opinions and integrated each other’s views. I think this was a solid foundation of our formal canvassing process.

Fordham University Graduate School of Service students were honored to meet with several state senators and assembly members Wednesday, April 25th, at NASW’s 2018 Social Work Student Legislative Education and Advocacy Day (LEAD). All students had a primary goal, to lobby for the banning of conversion therapy – a harmful so-called therapeutic practice that promotes “conversion” to heteronormative status, homophobic ideology, and LGBTQI discrimination. Most students canvassed all throughout the New York State Capitol’s Legislative Office Building, and four students were fortunate enough to be invited to the Chamber of the New York State Assembly where they met, shook hands, and small talked with several members. While on the assembly floor, students seized the opportunity to continue lobbying for the banning of conversion therapy and spreading the message about the still legally sanctioned practice. One congress member referred to the practice as “child abuse,” and several congresspersons verbally endorsed the ban. The students reported the experience as vastly informative, inspiring, eye-opening, and inspirational. They were privileged and honored to advocate for LGBTQ youth. GSS students plan to continue the discussion back in their districts; they will not cease their advocacy and promotion of safe, evidence-based practice.

The LEAD coordinators had lots of information and talking points at the ready, and even setup individual meetings with MSW students and the elected officials in their home district. I recently had the pleasure of speaking to the office of my State Senator, Martin Malavé Dilan and the State Assemblywoman from Fordham’s Lincoln Center district, Linda Rosenthal. Both support banning conversion therapy for minors, and Assemblywoman Rosenthal is a cosponsor of a bill to do just that in the NYS Assembly, which has passed the bill several years in a row. In talking with them, knowing their support, it became clear that this issue was very divided by the aisle. It was wonderful to know of their support, but difficult to know that there were many who didn’t feel the same. It is my hope that as more information and research become public around the detrimental outcomes of conversion therapy, more congress members will see this for what it is, torture.

I learned a lot from my LEAD day in Albany, in particular how accessible our elected officials are. Their doors are open, you can make appointments and send information. Call them to make your voice heard. They are chosen by the people to work for the people. That means you. If you don’t agree with conversation therapy, tell someone, send an email, pick up the phone. In this very interesting (to say the least) political atmosphere, states like NY and cities like NYC lean heavily on state and local policy to create the culture in which we want to live. And those policy makers are an extension of you, and the world you want to live in. If this practice isn’t a part of that world, what can you do today to remove it?