On October 4, 22 social workers from Berlin and Frankfurt, Germany paid a visit to Fordham’s Graduate School of Social Service as a part of an International Federation of Settlements (IFS) international study tour.

GSS Associate Professor Dr. Lauri Goldkind organized the welcoming event at Fordham’s Lincoln Center campus. In addition to an introduction to Fordham GSS, the afternoon also consisted of a conversation on US social work education, a panel discussion on the dimensions of university-community based work in New York City, and an open dialogue about the differences and similarities between German and American social work.

Before the formal presentation began, participants were curious about the recent news they’d heard about forced migrants in NYC and other sanctuary cities throughout the Northeast US. For the past few months, thousands of migrants have been sent by bus from states like Florida and Texas, and the world has taken notice.

Dr. Heinz Stapf-Finé of ASH Berlin asked the question everyone was thinking.

“Is this politically motivated?”

After a brief silence (and following affirmation), the discussion continued with Dr. Gregory Donovan, Fordham Associate Professor of Communications, explaining the meaning and significance of “sanctuary cities” in the US.

A city whose municipal laws tend to protect undocumented immigrants from deportation or prosecution, despite federal immigration law.

Donovan noted that there are even Fordham alumni who are working to provide a proper welcoming service to asylum seekers who have been sent to NYC.

“It is an incredibly cruel and unjust system that just needs to be flipped on its head, and the solution isn’t going to just be a quick, rapid response campaign,” said Murad Awawdeh, PCS ’19, one such alumni working to help asylum seekers, at an event in September organized by Fordham’s Center for Community Engaged Learning. “We need to change our immigration system. It is not built to support people, it is not built to be just, and we’re going to continue to see horrific stories.”

A Rapid Growth for Social Work

Goldkind kicked off the social work discussion, highlighting just how important and fast-growing the profession is in the US. 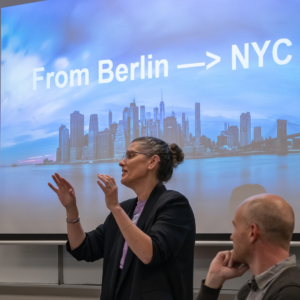 “There are more clinically trained social workers than psychiatrists, psychologists, and psychiatric nurses, combined,” she said, quoting the National Association of Social Workers (NASW), “adding up to over 200,000.”

And the industry’s rapid growth shows no signs of slowing down. According to the Bureau of Labor Statistics, job openings are expected to increase nine percent from 2021 to 2031, which is above average when compared to other professions.

Germany/US Social Work – How are They Different?

One major difference between budding social workers in Germany and the US, the group agreed, might be their motivations. Goldkind noted that a majority of US social workers pursue a Master of Social Work (MSW) degree to become clinical therapists, and may not be as interested in the policy side of social work. In Germany, however, not many social workers serve as therapists — and the two professions are very distinct.

“I make sure to clarify on my resume that I am not a therapist, I am a social worker,” one attendee said. “Because I am proud to be a social worker.”

“Due to the pandemic and the rising need for therapy,” said Dilek Yüksel, Bildungsreferentin at Die Paritätische Akademie Berlin. “German social workers might be going more in that direction.” 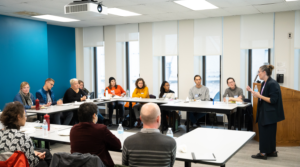 Dr. Goldkind speaking to the class of visitors

US Fieldwork and Community Partnerships

Goldkind then ushered in the panel portion of the day’s agenda, which consisted of three main presenters:

Graney began the discussion by introducing a new model University Settlement has created and implemented for its MSW field education interns. Using a two-day orientation and shared framework for all interns, University Settlement is hoping to give students a streamlined and structured field experience.

“We’re trying to make the process unified and streamlined,” she said. “We’re trying to integrate what the students are learning in class with the field experience, and how it all connects to the core competencies of social work programs.”

The organization first teaches students about its core values during the orientation process, while also giving them a background on the historic settlement house movement in NYC. Throughout a field intern’s time at University Settlement, they can also expect to receive monthly professional development workshops.

“We want to support students so that they feel competent and ready to work after graduation,” Graney said. “And the hope is that other settlement houses will use this framework as well.”

Desiree Lewis, GSS ‘19, followed with a presentation on how her organization, Riis Settlement, adapted during the COVID-19 pandemic. When leaders at Riis saw staff and youth members struggling with the impacts of the pandemic, they stepped in to put people first.

“The pandemic brought a need for change for the youth and the staff,” Lewis said.

Riis implemented mental health services for its staff, and raised the part-time wages in order to fill vital positions. Once the organization was operating at full capacity again, Lewis said it formed partnerships with organizations who offered youth development services to professionals, in order to train the newly hired staff to meet the ongoing (and increasing) demand.

Once those new staff members were caught up to speed, Lewis said her program started to make big, positive changes to the schools it worked with. One of these changes was called the “Positive Action Curriculum” (pun intended).

Under this new curriculum, Lewis and her colleagues taught young people how to implement strategies on good decision-making, despite how difficult their circumstances may be. She spoke to one instance where a school went from being notoriously ranked #1 on a list of most dangerous schools in the area, to now not even appearing on the list at all — and the Positive Action Curriculum played a large role in the transformation.

“The culture changed at that school,” Lewis said.

Lewis finished by acknowledging how her time studying abroad in Germany actually impacted the changes she brought to Riis, and still brings today. One of these changes being the implementation of after-school programs and services, like the ones Riis offers, into the latter half of the school day. This integration, Lewis said, was the norm in Germany when she visited, and she wanted to bring that back home.

“Because everyone has agreed to come together, we’ve seen a shift in our children,” Lewis said.

Lastly, Dante Bravo demonstrated the policy aspect of settlement houses, and how their organization, United Neighborhood Houses (UNH), assesses the policy needs of those doing the vital work in the communities — like Lewis.

UNH does this, Bravo said, by bringing those people in the field together to understand what’s going on. Then, they decide how UNH can “give capacity to make political decisions.”

Bravo stated that one issue that can arise in the partnerships between states and settlement houses is the timeliness of payments. They have seen many times that states do not always pay by the agreed-upon time in those contracts, causing the settlement house to lack funds to pay their own staff members.

This causes a trickle-down effect that is not only harmful to the staff members at settlement houses like Riis, but also to the youth in which they serve.

Fordham GSS MSW students aren’t the only ones out in the NYC community who are making an everyday impact through field placement. Donovan explained how he is introducing his students to settlement houses—and the impact they have—through a new course in Fordham’s Communications and Media Studies department.

“Designing Smart Cities for Social Justice” is an experiential course created by Donovan in partnership with Fordham’s Center for Community-Engaged Learning, where students are rotated through the settlement house experience and try to answer two questions:

“Smart cities put data and digital technology to work to make better decisions and improve the quality of life. More comprehensive, real-time data gives agencies the ability to watch events as they unfold, understand how demand patterns are changing, and respond with faster and lower-cost solutions.”

In the past, Donovan’s class has also provided tech workshops for the community. For instance, students have helped organize Zoom tutorial sessions for seniors in the area. The information, however, doesn’t stop at how to use the platform.

“We couple the training with the economics of software,” Donovan said. “Like, why is this service free? What data do they collect when you use the platform?”

Donovan also included that he ensures to teach students about the history of Lincoln Square, which was once San Juan Hill — an extremely diverse area of mostly African American and Puerto Rican residents. It was erased due to the mid-20th-century sweep of urban renewal to create Lincoln Center, displacing thousands of families, and removing the history that the neighborhood existed.

“It’s important that the students understand the land they’re on,” Donovan said. “And the settlement houses’ commitments to those from San Juan Hill who are still here.”

The Power of Settlement Houses

This international and interdisciplinary meeting is proof that settlement houses play a vital role in communities all over the world.

As the last bites were taken from the day’s lunch (provided by The Migrant Kitchen — a certified B-Corp), Goldkind and Yüksel exchanged international gifts — but for Yüksel and her group, there was still much more to do. They had an action-packed schedule of visiting settlement houses in the community to learn more.

“It’s a lot to think about,” one group member said. “We’re not just talking about money and budgets, we’re talking about the quality of social work.”