skip to main content
Return to GSS
You are at:Home»Alumni»For GSS Alumna, Paying It Forward is a Way of Life
Story by Tom Stoelker & Photos by Bruce Gilbert – Inside Fordham
Emily Borghard, GSS ’17, takes the idea of volunteering very seriously.

After some research, Borghard found her calling in social work and then found Fordham’s Graduate School of Social Service. She earned her master’s in social work last year, and today she works as a clinician serving domestic violence survivors. 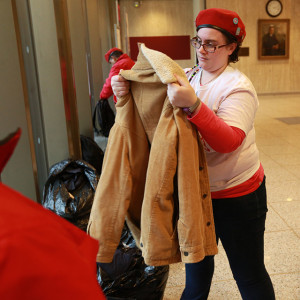 But she still volunteers practically every day giving out clothing and toiletries to the homeless. She said she never leaves home without something to give away, most of it stashed in a backpack that she calls her “Mary Poppins bag.”

Several years back, Borghard was in need of help herself. She was in a car accident while in high school, and she experienced repeated seizures and short-term memory loss. Eventually, she underwent brain surgery to install a NeuroPace, which she described as a “pacemaker for the brain.” All the while, her parents, classmates, high school teachers, and college professors helped see her through her recovery. To her mind they paid it forward; now it was her turn.

Much to the consternation of her neurologist, Borghard traveled overseas through an exchange program to teach inner city students on the outskirts of Marseille, France.

“I said, ‘Isn’t this what the [neurological]device is supposed to be used for? I’m going to live my life and make a difference,’” she said.

When she returned to New York City and began classes at Fordham, she joined the Guardian Angels, a volunteer anti-crime activist group. Through the group, she began to reach out to the many homeless men and women throughout the city, offering donated clothes, toiletries, and conversation. “Most homeless people just want someone to recognize them and talk to them.”

Although a few of her friends were concerned about her safety, she said that as a trained social worker she understands how to mitigate risk. Plus, it doesn’t hurt to be a member of the Guardian Angels.
“They’ve got my back,” she said, adding the same was true of her Fordham professors.

“They were willing to let me think outside the box,” she said. “They understood that as a social worker you’re dealing with human beings; not just a textbook case.” 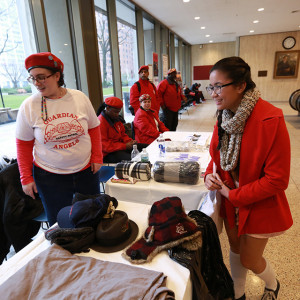 On Feb. 10, several Guardian Angels and a few Fordham folks joined Borghard for a clothing drive at Fordham’s Lincoln Center campus. The group collected gloves, hats, coats, and toiletries. To organize the event, Borghard teamed up with FCLC sophomore Cat Fernando, who distributes socks to the homeless.

“They are thrilled to get basics, like lotion,” said Borghard. “These are items we take for granted, perhaps because our skin isn’t exposed to the elements all the time.”

Although she says she doesn’t volunteer to make herself feel good, Borghard recalled a moment of giving that warmed her heart. She recently lost her father to cancer. Her mother suggested that she distribute her father’s clothes among the homeless men that she’d come to know by name.

“That felt good for my mom, and it felt pretty good for me, too,” she said. “He’d owned some really nice things.”

She gave one man her father’s sweater, and it put a big smile on his face.

“When I saw that, I got emotional and explained why his smile meant so much,” she said. “He looked at me and said, ‘I am going to wear it and do it honor.’”

Borghard wishes that everyone could share in the volunteer experience. It would change perceptions, she said.

“Just because someone doesn’t fit your perfect ideal—maybe they are not dressed well or don’t smell great—they’re still a person. You have to ask yourself, ‘How am I going to treat them?’”