skip to main content
Return to GSS
You are at:Home»Alumni»GSS Alum Appointed to Board of Directors at New Settlement

In his new position on the Board of Directors at New Settlement, Jason Acosta, GSS ‘16, wants to be a bridge.

It’s Acosta’s experience—in the NYC public school system, in 18 years of foster care, and continually fighting the systemic barriers set before him and many other people of color—that serves as the bedrock of that bridge, the foundation on which he hopes to support both the New Settlement and Bronx communities into a better future.

Then, after he finished his MSW degree, Acosta was contacted by New Settlement Associate Executive Director Allison Palmer, who told him the organization was looking for a new board member. Acosta was excited for the opportunity — not just to be on a Board of Directors, but for an organization within a community that continued to be such a large part of his life.

“I had a chance to meet the board leadership, and I felt really good about it,” Acosta said. “What is important for me is the commitment of the Board and leadership to the people. Folks like myself and others who will hopefully join helps really give the community a voice in an authentic way.”

A Social Worker, Born Through Questions

Acosta’s career in social work is driven by his passion for people and community. But there are a lot of professions out there designed to help those around you. What made him realize social work was his calling?

It started as a young man who had many questions — about life, his friends, himself. Why weren’t his peers graduating? Why did he spend 18 years in foster care? Who was he, really?

Acosta took a social work class as an undergraduate at Marist College and it “opened his eyes” to today’s systemic issues, specifically around what it means to be a Latino man.

“That started a real deep dive for me into who I was,” he said. “I really wanted to know where I came from, while at the same time, understanding what’s happening in our community and what we can do about it. Social work helped me to understand those things, but also answer the questions that I had.”

After that, Acosta made it his mission to help and educate those people whose situation he’d lived before.

“I knew I wanted to have an impact in education,” he said, “and create opportunities for people of color who come from communities similar to mine.”

By the time he enrolled at Fordham GSS, Acosta was already working at a nonprofit. He came to Fordham to try and learn more about the nonprofit sector, and how to excel within it. The lessons he learned in class, Acosta said, were immediately applicable to his everyday job position, and helped him stand out at work.

“[Fordham’s program] helped me to learn how to build organizations and programs from the ground up using a social justice framework — which for me was groundbreaking,” he said. “We spoke about being in positions of leadership in the nonprofit space, and knowing that [those leaders]don’t always know what’s going on in the community, nor ask [the people living there].”

As someone who wanted to one day start his own nonprofit organization, Acosta lapped up the information about budgeting, taxes, and many other complexities in the space. But he couldn’t help but recognize and wonder, why aren’t the people with the knowledge about the communities and the service—social workers, specifically social workers who identify as people of color—at the table during leadership discussions? Acosta knew that was a problem.

So, he made it his career’s mission to give voice to those who need it.

Striking Out on His Own to Help Others

Along with his position on the Board at New Settlement, Acosta keeps busy through multiple professional avenues. He currently works as a DEI Strategist for the New York City Department of Education, is an adjunct professor at Hunter College, and also acts as a consultant for “organizations and communities on a macro level to assess systemic trauma, thinking about the ways in which organizations at large perpetuate inequity, create hostile environments, and further marginalize people of color and oppressed groups.”

“That’s the beauty and social work,” he said. “We can exist anywhere.”

However, his business had to be built over time, and there were moments when Acosta doubted if the success would ever come. Impostor Syndrome, or the feelings of inadequacy in life or career status, mostly brought about by self-doubt and insecurities, has the ability to affect anyone — whether you’re just starting out, or are established in the profession.

“Certain places really rely on hierarchies, and if you don’t hold a certain title, they won’t even bother to talk to you. All of those things really started to impact the way I viewed myself,” Acosta said. “When you’re younger, you’re dreaming of all these things, and you go into the career and you’re like, This is the thing I want, but then you get into the career and people are telling you that you’re not good enough.”

But the more Acosta attended conferences and networking events, listening to the keynote speakers and facilitators, he realized something: the speakers just weren’t that good.

“As I’m sitting there and I’m watching, I know who’s real,” he said. “When I speak, you can hear my passion; I don’t need to make that up. I’m not performing. But I started to see that performance happening. These speakers weren’t really in the communities.”

So, he started speaking. And facilitating. Pretty soon, the rooms he spoke at were filled. Not long after that, the people who wouldn’t let him into a session due to his credentials were in his room taking notes.

“That gave me the confidence that I needed to start to overcome Imposter Syndrome, because I noticed that every time I would speak people were engaged,” he said. “And as I dug more into the research, I started to be able to articulate [my story]in a way that made sense to different people. I had the full experience; I wasn’t just talking about this theory, I lived the theory.”

Asking Who Am I? And Finding Identity

In his 2020 article “Reclaiming Our Identity,” Acosta poses the question of Who Am I? and details the difficulty hehas had (and still had at the time of the article when he was 28), with personal identity. Reflecting back on his childhood—specifically his time within the NYC education system—Acosta wonders “why I never truly learned about people who looked like me, or why understanding the history of the many identities I possess was so difficult.”

Acosta writes that this initially resulted in his portrayal of an identity that was not necessarily “living a lie,” but suggests 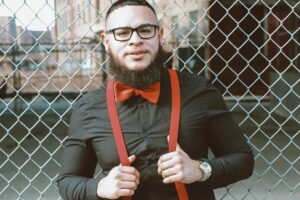 that “there is so much more to who we are or who we have been taught we are.”

So, how can people of color begin the process of understanding their identities, when many of the spaces that influence our society are overrepresented by white dominant culture? Acosta outlines a process in the article that can be useful for those who, like him, struggle with this issue.

“So how do we engage in the process of decolonizing our identities? First, we recognize the power of dominant culture and oppression,” Acosta wrote. “Then, we interrogate our own thoughts, identities, and understanding of how we view the world. We spend time researching and learning about our culture, our heritage, and our environment. We then take an ancestry test to know where our ancestors come from and our lineage of amazing people. Then we can start to answer the question who am I? And continue the journey to liberation.”

And along the way, Acosta noted in our interview, writing down your journey and findings can be a great way to discover answers — things about who you are that you may not have known.

“Write it down; start to define it,” he said. “What does it mean to you? Where does it fit into these societal dynamics? And as you’re starting to do that, you’ll start to unpack and learn a lot about how these identities come together to create who you are.”

Acosta added that identity is malleable, and changes as you traverse through life. No one stays stagnant, and as you take on new stages of your life — whether that be starting a family or a new career path — that identity is subject to change. This is normal, and people should expect it, and be ready for a lifelong process of constant discovery.

“This takes years of work,” Acosta said. “I grew up low-income, but now I’m considered middle class, and so what does that mean? I’m still figuring it out.”

Building Community at Fordham and Advice for Social Workers

Fordham as an institution was not a part of Acosta’s life until he attended GSS. As a lifelong Bronx resident, he knew about the school, but never felt the connection its students felt and continue to feel.

“Fordham is an excellent academic institution,” Acosta said. “So, here you have this great school in the Bronx, but what are we doing to educate the students about the Bronx community?”

Along with classes such as GSS Associate Professor Gregory Acevedo’s Bronx Explorations, the University is finding other outlets to educate students about the community, and “open the gates” to build a more synergistic relationship within the Bronx. One of those ways is through sponsorship of a recent event founded and organized by Acosta — the inaugural All the Way Up Bronx Summit.

Held on May 13, the Summit highlighted “the emerging and established Bronx genius in fashion, tech, entertainment, finance and entrepreneurship while celebrating the Bronx community.” It gave up-and-coming Bronx creatives an opportunity to learn from Bronx artists who had been in their shoes.

Acosta also has his own podcast, Live from the Bronx, and recently served on a panel for GSS students, speaking about career opportunities and how to thrive in the social work profession after graduation. He told me about the importance of intentional networking in the professional space, and how life is a continual journey of learning.

“If I’m an MSW student about to graduate and I’m attending a Fordham University alumni event, I’m going to go in there and I’m going to look for people who are doing work that I might be interested in,” he said. “So I think networking is big. I think the other thing is constantly learning. The learning doesn’t stop when you leave school. You have to learn the language of the industry you’re going into.”

For example, Acosta continued, if you’re going to be a social worker in a hospital, it would serve you right to teach yourself hospital-specific terms, so that you’re not lost in the jargon and don’t get overwhelmed.

And you don’t have to do it on your own. Similar to networking, Acosta recommended finding a good mentor in the field you’re interested in, who can teach you the lay-of-the-land and guide you toward the path best suited for you.

But his biggest piece of advice: don’t be afraid of failure. Take the risk your gut is telling you to.

“I think sometimes we get into these spaces—and we’ve spoken about Impostor Syndrome—where you think people don’t want you around, or someone tricks you into thinking that you shouldn’t be there, and that’s not just true,” he said. “I think a lot of people, young people especially, going into careers will feel that way. So, we stopped doing the things that we need to do to get to the next position. I definitely think being able to take risks is crucial. And you just have to want it. You have to have determination and hunger.”