skip to main content
Return to GSS
You are at:Home»Alumni»A Search for Attunement in the Digital Age

As a clinical therapist, Jacqueline Soboti, GSS ’09, prioritizes the art of attunement in the therapeutic space.

“Our nervous systems are always communicating in an unconscious way,” she said. “When there are shifts that occur between the client and therapist, it’s important for the therapist to acknowledge what’s happening in their body – what’s occurring beneath the surface.”

Attunement is defined as “a kinesthetic and emotional sensing of others knowing their rhythm, affect, and experience by metaphorically being in their skin, and going beyond empathy to create a two-person experience of unbroken feeling connectedness by providing a reciprocal affect and/or resonating response,” according to Richard Gordon Erskine in his 1998 article, “Attunement and involvement: Therapeutic responses to relational needs.”

And as someone who works with teens and emerging adults, Soboti constantly recognizes attunement and uses this unconscious information to make breakthroughs.

However, this, like many things, has gotten more difficult since the COVID-19 pandemic hit. A shift to online sessions has altered the ability to gauge another person’s rhythm or kinetic energy. When you’re a face on a screen, part of you is left behind.

This might seem troubling, but Soboti said she’ll take those odds. Sixty to seventy percent is better than zero percent, which is what it would have been for the past year without technologies like Zoom.

“Thank god for technology,” she said. “How else would we maintain relationships? [60 to 70 percent] is better than having someone have to give up therapy.”

But with that notion also comes the issue of privilege. Sure, those who have a computer can continue therapy — but even in a world overrun by screens, that still isn’t everyone.

This dilemma is one of the many topics Soboti has come across in her career; discusses on her new podcast, Two Therapists Tales; and that we covered in our interview.

Soboti knew she wanted to be a social worker when she was twelve years-old.

Soboti was interested in people’s stories. And as someone who struggled with their own mental health during her college years, she loved learning about the process of “getting well”.

“I was seeing a therapist at the time, so within my own journey and loving the process of getting well, I knew this is what I wanted to do,” she said. 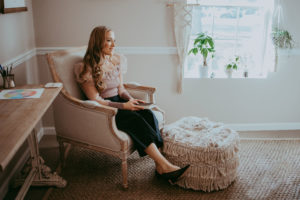 So, she enrolled in Fordham’s undergraduate psychology program with the goal of starting a private practice. However, after a year of studying and continuing to battle mental health issues, Soboti didn’t see six years of schooling fitting her timeline.

“Because my mental health was in such an acute state, there was no way,” she said. “It was hard to come to terms with that.”

What happened next Soboti could only describe as serendipitous. She began seeing a new therapist (“the good one,” she said, laughing) who had gotten their MSW at Fordham’s Graduate School of Social Service. The relationship flourished, and in the spring of Soboti’s sophomore semester, she applied for her first social work class.

“The rest is history,” she said. “I applied for the five-year program and started doing the classes at Lincoln Center. I had a great internship in the Bronx at an outpatient center called Full Circle. It was such a rich, rewarding experience.”

At the time, Soboti said the social work program at GSS was a small community in an even smaller field of schooling. Now boasting a program of over 2,000 MSW students from all over the country, GSS isn’t the only school who has grown with the times. Soboti noted that other universities starting to “get with it” and offer a social work program is a sign of the times.

“We need social workers in all aspects of life. We are a valuable seat at the table — whether it’s an interdisciplinary team in an inpatient psych unit, or it’s schools that are treating students holistically and looking at the whole picture,” Soboti said. “Fordham supported that career path and had that in place so early on. I was really lucky.”

I asked her what she thought about the rise in discourse concerning mental health among the mainstream. Words like depression, anxiety, and trauma are no longer limited to the therapist’s inner circles; there seems to be a trend to be more open. Are there more mental health issues now than in the past, or are people just more comfortable talking about it?

“I think it’s both,” Soboti said. “I think people are getting more comfortable saying, ‘hey, I need help. This is hard.’ Normalizing that has been a huge shift. But there’s still a lot of work to be done.”

This mostly involved switching operations online, where people could stay home and still interact safely while the world tried to repair. (The world is still trying, long after the first pivots.)

Social work was no exception. Professionals like Soboti had to schedule appointments with their clients through a screen-only view.

As someone who works with teens and emerging adults, this is where her specialization made things interesting. Soboti was entering her clients’ digital domain.

“This is how they normally communicate,” Soboti said. “So, they pivoted in a very adaptive way.”

But the same can’t always be said of those marginalized voices in our society, and Soboti made sure to stress the importance of recognizing that.

“Some of those marginalized and oppressed groups, they don’t have access to a computer or Wi-Fi, or maybe older adults who aren’t savvy with the tech role,” she said. “It’s important to highlight and talk about that — how disenfranchised some of these groups are and how that’s impacted them and their ability to access resources. That’s the social justice piece of our work.”

Privileged people have Wi-Fi, a computer, and a quiet room in which to speak about their hardships. But what about those who don’t? What about the victim of domestic abuse, who now has to speak to their therapist while their abuser sits in the next room?

While the increased use of technology brought with it a large set of solutions, it didn’t come completely problem-free. Acknowledging that and working on it — so that everyone has access to help — is a large part of the future of the profession.

Relationships and Trust Among Parents and Their Children

Soboti knows it is a monumental step parents take when they trust the well-being of their children in the hands of a stranger — even if that stranger is a qualified professional.

“It’s a huge honor and responsibility,” she said “I definitely don’t take it lightly.”

However, once parents take that initiative and establish that trust, they have to do that — trust the process. That means what children say to Soboti is confidential and part of a therapist-client relationship. This can be difficult for some parents to cope with.

“While the parents are important and I want them to know that I want to take care of their child in the best way,” Soboti said, “the teen comes first.”

In the long run, Soboti is also trying to provoke change in these parents alongside their children. Hopefully, this will open up avenues for more dialogue between them.

“I am one person and I am one hour of their week,” she said of her clients. “In order for teens and emerging adults to get through this arduous stage, they need pillars of support. And yes, their peers are pillars of support — but they need a trusted adult whose frontal lobe is developed and can think through things logically.”

Soboti is taking all the knowledge she’s learned throughout her social work career — attending grad school, working in a hospital, owning a private practice, and more — and offering it in segments on her new podcast, Two Therapists Tales.

The podcast is full of personality and substance.

Soboti states, “I wanted it to be about other people and their specialties. I wanted us all to be able to learn from the pros. The podcast allows us to connect with people at large. Especially during this time where we are limited with face to face contact.”

So far, podcast episodes have covered topics such as mental health’s intersection with racial and social issues, beginning therapy, and COVID-19. And although experts in their respective fields are invited on to speak about their specific specialties, the content is digestible for anyone.

“I want to cover the gamut of who could be listening in – is it a parent? Is it a teen? A budding social worker? An experienced social worker? I try to make sure we’re covering all facets.”

The show airs once a month, and April’s episode will be dedicated to Alcohol Awareness Month.

For Soboti, podcast hosting is just another facet of her eclectic career. Currently in the social work doctoral program at Rutgers University, she plans to take on teaching next. She attributed this career malleability as a major benefit of the profession, and had some advice for anyone pursuing an MSW.

“The thing I love about social work is you can always change yourself,” she said. “Make the profession what you want it to be.”